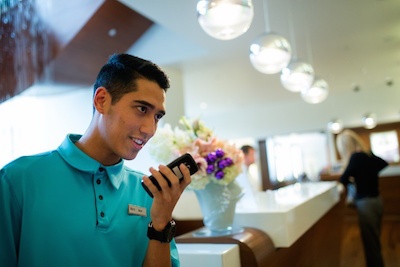 RoIP: What Radio Over IP Is and How It Can Help 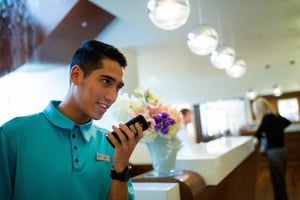 Investing in digital two-way radios is an important step forward for any team or organization, and to unlock even more of the technology’s benefits, Radio over IP (RoIP) is an effective, low-cost boost that leverages networks you already have in place – the internet or VPN.

As the name suggests, RoIP works the same as Voice over IP (VoIP) and adds some key radio-specific functionality and controls, such as Push-to-Talk (PTT), radio identification and frequency change.

If you’re looking to extend your reach and lower your costs – and who isn’t? – here’s a look at what Radio over IP is and how it can help.

What is Radio Over IP?

VoIP was originally designed as a replacement for the telephone as it allowed communication service providers the ability to connect multiple users for voice-based communication on demand.

In its most basic form, RoIP technology is a method of linking two or more radios using an internet-based connection, where it effectively transmits/receives audio communications over Internet Protocol (IP). Internet Protocol is the communications standard used to power the internet, in addition to both commercial and residential computer networks.

If you understand the concept of Voice over IP, RoIP is essentially the same but with an additional command layer to control basic radio functions, including:

To make the most of RoIP, it's best to work with two-way radio service providers specializing in unified workgroup communications.

Now that you’ve got an idea of what Radio over IP is, let’s take a deeper dive into why it matters and why so many companies, organizations and municipalities around the world are adding it to their communications toolkits.

Benefits of Radio over IP

Among its many benefits, Radio Over IP can:

Save you time and money

Radio over IP has the ability to be more cost effective because as stated earlier, it can be implemented over an existing IP infrastructure. It transmits via the web or VPN connection, meaning it can be deployed quickly and doesn’t rely on pricey leased lines or wireless links. And in terms of the speed of its functionality, it delivers the immediacy of the internet.

In the long term, cutting your reliance on physical infrastructure, such as copper lines, will also make it faster and less expensive to add radios or consoles, upgrade and expand.

Interoperability is the biggest radio buzzword, and what it means for you is the ability to connect users across disparate radio frequencies, legacy systems, dispatch consoles, computers and even smart phones.

Every stakeholder, regardless of their distance or mode of communication, can be instantly and securely connected over Radio over IP using an interoperability solution such as Motorola’s WAVE Work Group Communications.

WAVE is currently used by: the U.S. Coast Guard to connect bases on land with its ships, planes and helicopters; Washington State’s Emergency Management Division to help oversee public safety operations across more than 70,000 square miles of land; and the Canadian Pacific Police Service to link officers, dispatchers and other agencies across its 14,000-mile rail network and the border.

The connections across radios and consoles in an Radio over IP system are part of a mesh IP network that has inherent resilience. Even if one part of the network fails, the other parts are still fully functional. Users say any outages are rare and brief.

If it sounds like leveraging Radio Over IP is a good fit for your communications needs, the first step to getting connected is to contact an experienced provider.