Why Law Enforcement and Social Media Go Together 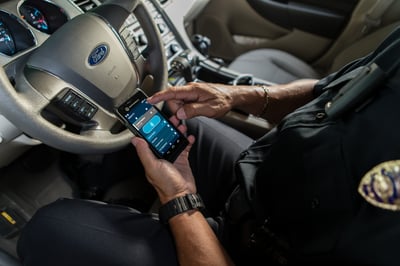 With today’s speed of information and tech-savvy civilians, social media is not a passing trend. And now more than ever, law enforcement and social media are coming together to keep people safe, informed and enlightened about the role of law enforcement in our society.

Here are the many benefits law enforcement officers across the country are gaining by tweeting, posting, and sharing; along with the challenges in social media they’re learning to overcome.

Sharing real-time information. Departments are using the immediacy of social media to their advantage to quickly — and succinctly — notify the public about everything from protests in progress, to traffic congestion, to police activity. A brief tweet from police about an accident can be immediately retweeted to amplify the message and keep more people out of officers’ way.

Enlisting the public’s help. Agencies are also using the amplification power of their followers to distribute sketches of suspects, security camera footage of accidents and details about missing children and elderly. The chances of reaching someone who recognizes the person law enforcement is looking for increases with every retweet and shared post.

Getting information. Social media also makes it possible to track criminal activity. Many don’t realize the virtual paper trail they leave when they post pictures, statuses, and check-ins. This aids officials in finding possible suspects.

Interacting with the public. Social media also lets the public contact law enforcement. Officials can’t be at every place at any given time, so this allows for the public to be the “eyes and ears” of the community. Social media can also be used as a non-emergency line from the public supplementing your 911 communications.

For police officers, being able to share details and perspectives directly with the public via social media is a chance to cut out the middleman and deliver messages in departments’ own words in their own way.

Making people smile. The Seattle Police Department is known for using its Twitter account to share an adorable photo of a canine officer that helped with an arrest. On Instagram, the Reykjavik, Iceland police department has drawn thousands of followers for its no-translation-needed posts of officers eating ice cream, pretending to write speeding tickets for toddlers on rides in the mall and playing with Snapchat. It’s a way to humanize officers and increase community engagement.

Inspiring innovation. By combining law enforcement and social media, new ideas can emerge to unite officers and foster collaboration. For example, the first Global Tweet-a-thon brought together over 230 participants spanning 10+ countries, almost all of whom were law enforcement agencies. The overall goal was to bring awareness to policing.

Talking about wins. Combining law enforcement and social media also creates an opportunity to discuss big arrests, share photos of the guns and drugs taken off the streets, and show off the inspiring volunteer work being done by officers. In addition, posting pictures of hard-working employees that normally wouldn’t get too much recognition can bring about positive PR. By doing so, it also presents a friendlier version of law enforcement to the public, which sometimes doesn’t carry a positive representation of what they do.

Improving response. Tips sent to social media accounts of public safety officials are easy in the age of smartphones and tablets. And instant access to information allows for response times to increase as fire, police, and ambulance teams can respond in a much more timely fashion than before.

As law enforcement and social media continue to merge, it’s important to recognize barriers that must be overcome to be successful at achieving these benefits. Law enforcement officers should keep in mind the following points.

It can be a lot of work. Many agencies are already fighting the battle of having enough staff for daily operations. If you’re going to dive into the world of social media, it needs to be effective and consistent. Having someone specialized for that specific purpose is key to being successful online.

Simply having a social media presence isn’t enough. In order to be successful, it needs to be maintained and updated frequently. Content is very important. What you post must be relevant to the audience in order to gain a following. If you post things they aren’t interested in, people will be less inclined to jump on your social media bandwagon.

Social media allows for you to hide behind the computer screen. Many people see social media as a way to create anonymity, not allowing for one person to be held credible for what is posted on the site. Older generations especially aren’t too keen on this concept or social media in general for that matter.

Although good for rapid information, social media also stems the circulation of false information. Especially during times of crisis, people are easy to jump onto speculation claims that may or may not be confirmed as true. People post based on emotions and mainly word of mouth, so if false rumors are spreading you bet they’ll end up on social media. This is why having a crew dedicated specifically to your online presence is crucial in successfully implementing social media.

Social media can be an effective and efficient way for law enforcement to connect with the public for greater safety and awareness and to keep people informed about the great work of your department. For more information on how improved communications can help keep people safe, download our free Public Safety Checklist.