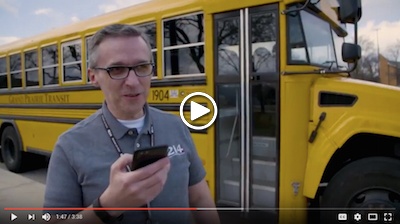 When it comes to effective communications technology in education, it’s clear that cell phones can no longer meet the dual demands of day-to-day school operations and safety.

School District 214, the second-largest high school district in Illinois, was one of our many education clients to recognize that they needed a secure communications equipment solution that would give personnel the power to communicate instantly and reliably.

The video and summary below provide a technology in education case study of how we created a integrated, seamless communications infrastructure that has increased school safety and optimized the district’s daily operations.

Illinois School District 214 at a Glance

Size: The district covers around 62 square miles, making it slightly larger than the city of St. Louis.

The district’s biggest challenges were around connectivity and coverage. Ted Birren, the district’s Director of Operations, said personnel were using radios from the 1950s and repeaters from the 1960s. The existing radio systems weren’t interconnected across buildings, and in some cases, within buildings.

The ChiComm team, including Operations Director for Sales and Service Tom Treichler and Account Executive Cathy Kulnig, started the district off with a basic system using Motorola IP Site Connect.

“Once they got familiar with the system, and happy with the system, then we just added on to fit their needs and budgets at the time,” Kulnig said. “They started out with maybe 150 radios, and we're now up to a thousand radios.”

That increase in number led to a transition from IP Site Connect to Motorola’s Linked Capacity Plus system and additional repeaters, Treichler said, giving redundancy that the district didn’t have before.

The new solution also includes GPS through NeoTerra for the district’s entire fleet, from driver’s ed cars to buses. The new radios report each vehicle’s location every 30 seconds, along with its speed and heading.

“We added the Avtech Console then we followed up with a logging recorder to log all the trunk traffic,” Treichler said.

District personnel say the advantages of having a new digital two-way radio system over cell phones include:

Being able to communicate instantly with a select group of high-level administrators on a single radio channel during a “scary situation.”

“The way that it's changed the most is having a sense of safety and security in our ability to communicate,” said Kate Kraft, Director of Vanguard School at Forest View.

Not having to rely on time-consuming text messaging when seconds matter.

“Yes we have phones, but you know the delay in texting, and the delay in calling … could jeopardize safety,” said Ray Finnerty, school resource officer for the Village of Arlington Heights Police Department.

“With the two-way radio, you pick it up you're connected,” Birren said. You've got that right now, instant communication.”

Personnel say a number of incidents that have reaffirmed the decision to upgrade their radio system, and they’ve gained a greater sense of safety and security for students and the general public.

We’re proud that we were able to tailor a unique scalable solution that addressed what the district needed to keep everyone safe.