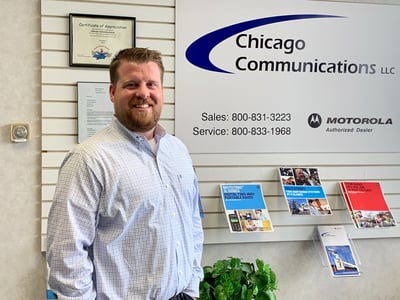 If you’re in charge of public safety in the Chicago area, Todd Niccum can help you find communications technology solutions.

A Government Account Executive for Chicago Communications for almost four years, Todd serves police departments, fire departments, and all agencies that get government funding to keep people safe. As an account executive for these agencies, Todd wants them to know his job is not about just making a sale.

“I don’t want to sell them something just because I’m good at selling,” he says. “I want to advise them on how to solve their communication needs.”

This dedication to being an honest, trustworthy partner has led to long-term customers and agencies that return to him for ongoing support, which is a source of pride for Todd.

“This means I brought value to them,” he says.

Todd says just the other day a customer, to whom he had sold a radio solution, reached out to him again. Now, the customer was with a different company and in a different situation. “He called me and said, ‘You helped me before. Could you help me again?’’

Being this type of “trusted advisor” is one of the things Todd loves about sales and the approach of Chicago Communications. “I treat Chicomm likes it’s my own company,” he says. “I see how different people run their business and I work with them to build a relationship that they can count on.”

Todd came to Chicago Communications from a nine-year career as a seventh-grade math teacher. With an interest in math and science, it was not a big leap to communications technology. And he says he uses his education background every day.

“My approach to selling is actually teaching,” he says. “I set out to provide a background and an education about what we can do to improve safety and communications for their officers on the street. I’m there as an advisor.”

In his free time, Todd is busy with his wife and three kids—the children are all six years old and under. As a dad, he says he used to enjoy motorcycles, golfing and going out with buddies. But now he’s playing soccer and climbing trees with his kids.

“It’s a busy household,” he says. But it’s very much in line with the three things he says he can’t live without: Faith, family and friends.